I had a request to show some of my repainted John Jenkins Miniatures.  I try to paint in the same style used on the original, and focus on the main color areas, leaving the details mostly unaltered. I did repaint some of the Indian faces to add to their individuality.

The first two photos are the Canadian Militia and Coureurs Du Bois sets and are some of the earliest in the Monogahela series. The original models are in the front, my repainted versions behind them. In the last 3 photos of the Indians where there are "triples" of poses, the originals are on the far left. 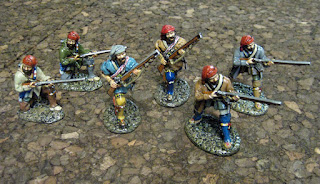 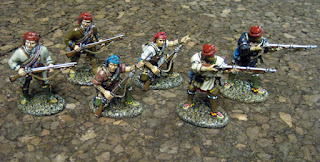 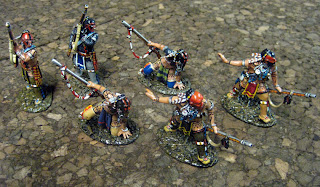 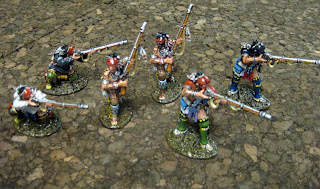 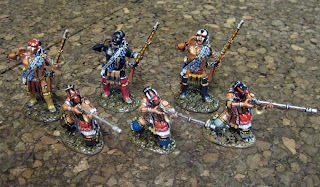 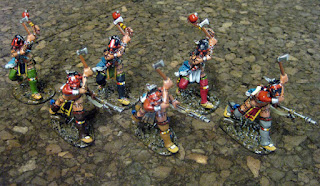 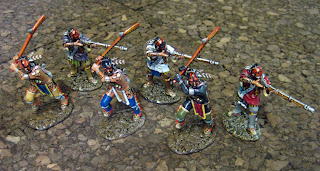 Check out the following on "Bring Your A-game"

http://bringyouragamemagazine.blogspot.com/p/con-artists.html
Posted by Cluck Amok at 12:23 PM No comments: 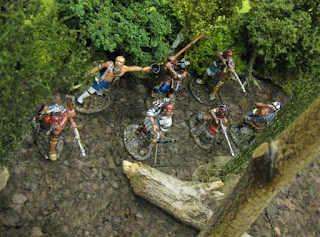 A Frontier on Fire

A game of the French and Indian War.

Recruits is presented by Lee's Summit (MO) High School and sponsored by the Organization of Strategic Gamers (OSG). Learn more about Recruits at http://recruits.mtswebsites.com/

We played This Very Ground from Keith Stine and Iron Ivan Games. I've read and/or played lots of rules for the French and Indian War and I rate This Very Ground among the best of them. Games are fast and appropriately "bloody." Scale is small unit skirmish; all men in a unit act together. Units are generally 5 or 10 figures and have personality. Leaders are important. This Very Ground is great for putting lots of big figures on the table, and is simple enough to teach - and play - at a convention.

The scenario is from the rule book and is called "The King Ascendent: A Frontier on Fire" and represents the continuing fighting that raged across Pennsylvania in the Spring of 1756. The French and Indian objective is the capture of the blockhouse that controls the bridge over the river and/or the deaths of all of the defenders. The Provincials mission is to. . . wait for it. . . "Stay alive!"

I swapped the Coeur De Bois unit for another Indian unit, and also the War Leader's retinue for a 5-man unit of French Marines, and added a new 5-man unit of Coeur De Bois to the French forces. I added another 5-man unit of Rangers to the Provincials, and added a stockade to the blockhouse, so the French and Indians would have 2 sets of doors to hack through to get to the Militia inside the blockhouse. Even so it still felt inevitable that the Indians would get through. . .

This Very Ground plays well at 54mm scale. I used the ground scale 1 pace = 1.5 inches, but otherwise used the rules without tweaks. Well, mostly without intentional tweaks. I tried a couple of different ways to handle leader casualties, and some things I got wrong as I am still learning the game, but This Very Ground rocks "right out of the box."


The models are John Jenkins figures, seen here in all their glory: http://www.johnjenkinsdesigns.com/ Some of the figures I partially repainted to make any "doubles" look more like individuals, and all have 2 coats of Minwax Polycrylic Protective finishes, to, um . . . protect them. One coat Gloss, followed by one coat Satin and they're ready for battle!

The terrain is based on the 12-inch squares produced by JG Miniatures, some of which I customized. The "foliage" is almost all JG items: http://www.jgminiatures.com/index.php

The "wooded" areas were a challenge. It was important to have a playing surface that "felt" like woodland, but was still a usable "playing surface."  Form must follow function, you know. After some experimentation, I hit on the combination that pulled it all together; 12-inch squares of cork, built up in layers where needed to match the JG squares, coupled with the simple "stick trees."

So here's how we classified the terrain in this game:
Flat green areas are Open Field: +1 Pace
Slopes are Incidental: -1 Pace
Roads: +2 paces
Wide Stream: - 4 Paces (or Impassable River, if you like)

Woods were "Heavy Woods" from the edge of the cork tiles up to 6" "into the wood" and marked by the little stands of saplings; this area considered the "thicket" at the edge of the forest.
Heavy: -4 Paces

The rest of the Woods is considered the "deeper wood" characterized by more mature trees and a more open nature so is classified as "Light Woods."
Light: -2 Paces

Formations at the edge of the foliage border inside the Woods are considered within 2 Paces of the edge, so can see and be seen/shoot/shot at from outside the Woods. Visibility inside the Woods is 10 Paces (Musket range is 15 Paces, by the way). 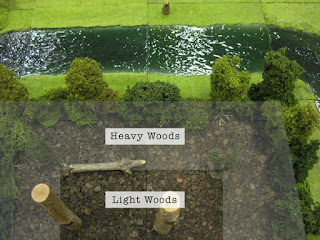 Viewed from the Southeast. The die in front of the stockade gate tracks the progress of the Indians' assault on the door. It starts at "1" - the Indians have to roll this number or lower - and goes up by 2 each turn the Indians make an unsuccessful attempt at breaking through. This is one of the few dice rolls the French and Indians did not consistently rock. 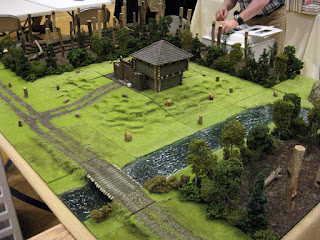 Viewed from the Northeast. 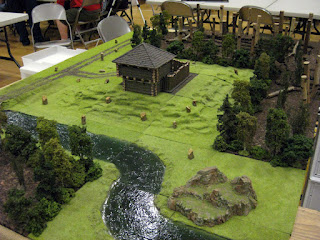 And finally the view from the West. Pretend you don't notice the stockade section is faced inside out. Aaaaaaaaargh! 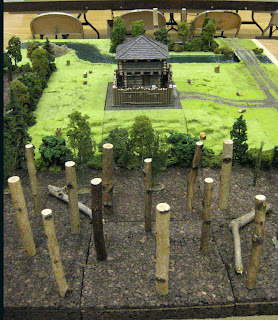 Two bands of Indians begin the assault on the blockhouse. The "smoke puffs" track Volume of Fire for the unit. The red bead is a Disruption marker. Units are disrupted when they fail a Courage check. Courage is checked each time they come under fire. Leaders are important to units when checking Courage, and rallying when Disrupted. 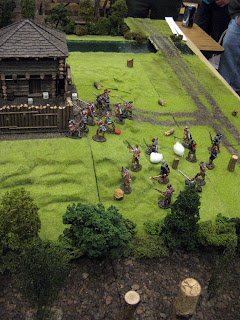 The third Indian Band comes on to provide covering fire for the assault. 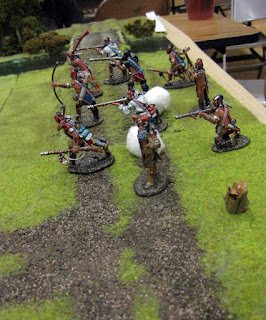 The Coeur De Bois enter from the west. I deviated from the scenario as written by allowing each side 2 "ambushes" as described in the "Trade Drought" scenario in the book. The Provincial Rangers ambush the Coeur in the woods. . . 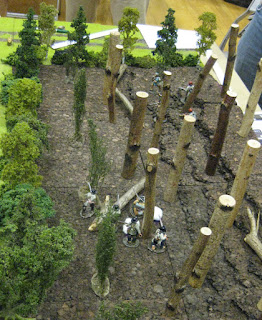 . . . and are ambushed by the fourth band of Indians in turn. Outnumbered and surrounded now in the woods, the Rangers are killed to a man. 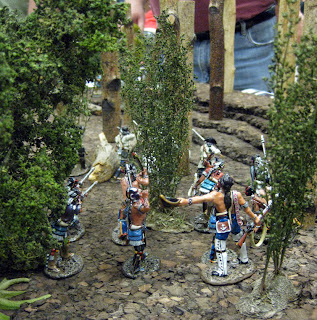 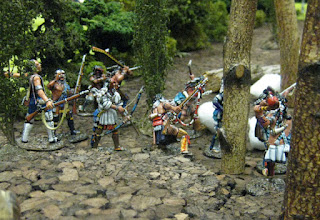 After several attempts, and several casualties from Provincial musket fire from the Blockhouse, the Indians crash through the stockade gate. 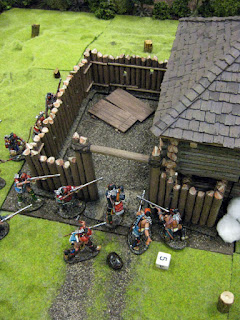 The Indian band behind pours past their brethren into the stockade yard, to begin the assault on the Blockhouse door. 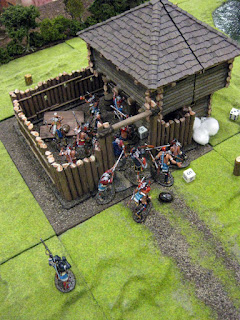 The End Draws Near

The entire French and Indian force now surrounds the blockhouse, the two Provincial Ranger units having proved unable to drive them off. What second Provincial Ranger unit, you ask yourself?! The two red Disruption markers are all that remained of them after the sneaky French Marines - just visible in the woods in the lower left of the photo - unleashed a devastating Volley! upon them. 5 muskets rolled 5 hits and all 5 hits rolled into Wounds! The entire 5-man unit of Rangers disappeared in a single volley!
Shortly thereafter the Indians broke down the blockhouse door and the final Melee was brief and bloody. Chalk up an overwhelming - quite literally - victory for the French and Indians. 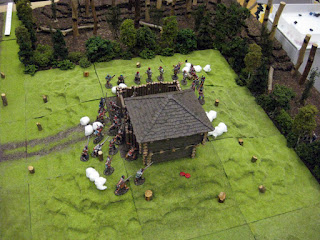 What's so great about Recruits?

I get to see my old game crew from TAWC (Tulsa Area Wargame Confederation) who make the twice-a-year pilgrimage to Lee's Summit, Mo., and whose help with set-up and tear-down of this game is very much appreciated. Recruits is also on my Olde Home Turf, as well as being home to Baron Von J and Lead Addict. Zee Baron and Lead Addict get big sloppy thank yous for playing the Provincials in the Friday night game, in which we determined the ambushes dramatically overbalanced, in the French favor, a game that was probably not balanced to start. Thanks, guys, for being great sports. 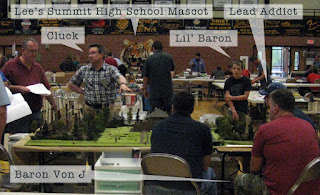 And Recruits attracts Young Blood. We hear lots of talk about the "graying of our hobby." As Recruits is sponsored by Education professionals, and presented by a public high school, it is a great venue at which to share our toys with a younger generation. Kids love to roll dice. They don't always know "why" they are rolling, but they're always willing - as evidenced by these two young'uns who commanded the Provincial Rangers in the second game on Saturday morning. 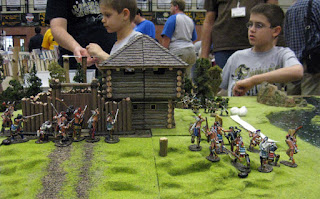