Back to the French and Indian War 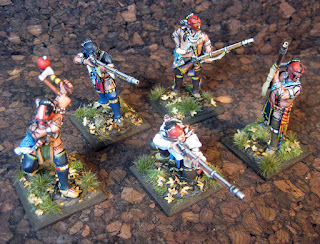 Here's a look at the new basing treatment for my John Jenkins 54mm models. Some members on the Lead Adventure Forum suggested the plain bases detracted from the overall aesthetics of "The Game."  As a reminder, you can see the original bases in the banner for the blog above. Of course I resisted making any of the suggested changes. Re-basing is a drag. But after adapting the five models above I have to agree with the  critiques. It'll take some time to redo all the bases in the pipeline, but it won't be difficult.

Key concern was creating a look that worked on both the long grass and the cork surface representing the "woodland floor." 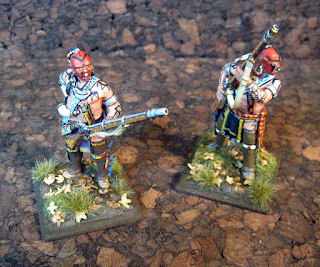 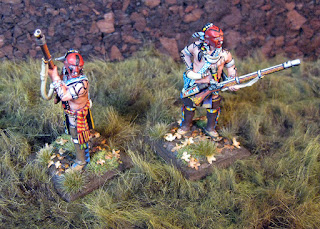 What do you think? Does it work? I have 40 bases to redo before Recruits in September. I've chosen the scenario and plan to do something a little more "skirmishy" then the last few games. Also working on a few repaints; specifically some early-war New York Provincials, based on the illustration of Plate E1 from the Osprey Men-at-Arms Colonial American Troops 1610-1774 (2). The original Lt. Jenkins of the Virginia Provincials is on the left in the photo following, standing next to his newly-found cousin Lt. Jenkins of the New York Provincials. 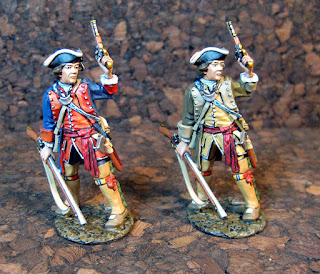 I really like the "buckskin and drabs" as described in the Osprey, and supported by this additional research I found at http://www.captainterrys.com/history.html:

In the year of 1758 there were some other alterations to the Uniform of The New York Provincial Enlisted Troops, such as their hats brims were cut down to 2 1/2 inches and no longer "Cocked", their accruements were the same as was issued to the regular British troops, (but, instead of white leather belts, the New Yorkers wore natural leather or brown colored belts.) All the New Yorkers were issued the standard Kings muskets and bayonets.

The Men of Suffolk County always responded willingly and eagerly to the Call to serve their King and their Province! There is not one documented record to indicate that any men were ever drafted into the New York Provincial Army from Suffolk County - they were all volunteers!

And I'll close with something only marginally related. . . Did you know Peter Cushing (yes, THAT Peter Cushing, of Hammer Studios fame) was a wargamer? Here's a link to the 1956 Pathe newsreel on You Tube. 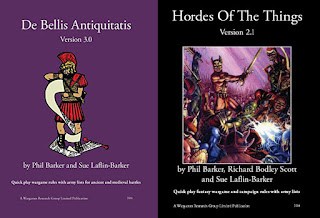 I use to play Great Hordes!, or GH! for short. GH! was a hybrid of DBA and HOTT, based on the basic text of HOTT 2.0, with the addition of the DBA troop types and associated rules, a points system and a few "tweaks" provided by its very opinionated creator, Jeff Bolton (still miss you, Jeff!). I was probably its main (maybe only) torchbearer after Jeff passed, because it allowed us (hey there, Tulsa!) to play Ancients to Medievals and pure fantasy with a single set of rules.

Now DBA 3.0 is out and while still essentially DBA, it is a more compelling, chaotic and nuanced gaming experience. If you didn't like DBA before, you probably still won't like it (unless age has brought you wisdom : ) but I like it even more. A good succinct review highlighting changes in 3.0 can be found here.

A couple of months ago I discovered D3H2 on The Miniatures Page. I hope Mr. Tom Thomas will pardon my re-posting here (with slight editing) his post from 28 October 2014, to save you, Dear Reader, the pain of wading through some Irrelevance to get to the Relevant:


"I created D3H2, which is basically DBA3.0 with the HOTT elements added in. As part of the development team for DBA3.0, I was able to incorporate the changes needed to bring HOTT up to 3.0 standards while we labored away on 3.0, hence the supplement was created in parallel with the new version of DBA3.0.

"I've played HOTT since version 1.0 and have always felt many of its methods were better than DBA 2.2 – and I managed to get Phil to agree and add them to DBA3.0. On the other hand many of the new features added to DBA 3.0 (like Fast), while great for DBA are even better ideas for HOTT – which needs to cover a wide variety of fantasy worlds (and be flexiable enough to cover worlds yet unwritten).

"HOTT's original tongue-in-cheek style doesn't reflect the more realistic take of today's fantasy novels (I'm not sure it really reflected the better works of fantasy from times past either). D3H2 allows a more historically rooted game but with fantasy elements.

"Generally the rules follow DBA3.0 but I have retained the point system, victory conditions and Big Battle aspects of HOTT2.0 as I believe them to be superior to DBA3.0.

"I have used all elements from both games (with a few blended together) so it is in some ways a bit more complex than either game. Feel free to limit yourself to just the pure "HOTT" elements. (But then I can't field my Lannister Pike blocks!) Its all in there but use only what you want.

"This unofficial version (though using only official rules) has greatly increased interest in HOTT locally (which frankly, due to play balance issues and weariness with the stereotyped elements, had been waning).

"If you're interested contact me at TomAndKate@aol.com (you must own a copy of DBA 3.0 to use the supplement).

"We just had our first tournament using D3H2 here in Atlanta. I will be running demo events at Siege of Augusta, Nashcon and Historicon.

So what changes will the HOTT player face in D3H2?

Access to the DBA troop types: Scythed Chariots, War Wagons, Camelry, Pikes (YAY!) and the proper light troops, Light Horse, Auxilia and Psiloi. We get to keep Shooters (Teppo for my Samurai!) and Bows both, and the rules for Longbows and Crossbows from DBA.

2 kinds of Hordes! Tougher DBA Hordes costing 2 points and "Inexhaustible" Hordes - meaning they can regenerate ala HOTT - for a single point.

Solid and Fast troop designations, and the ability to designate even more troop types than in DBA. Now you can have "Fast Knights," typified by Macedonian Companions.

DBA players now have access to a Points System based on HOTT.

Army-assigned terrain types and terrain pieces that are placed via a dice method that makes it way harder to tailor the battlefield.

Camps and 3 types of built-up areas. Note that the DBA "City" with all of its complicated denizen rules is replaced instead with the simpler HOTT Stronghold.

More limited deployment and movement in base-widths instead of paces. Movement is generally increased and the infantry even more so relative to cavalry.

LIght Horse and Psiloi moving more than once in a turn.

Less rear support during close combat but the addition of some side support. I really like this. Combined with the Solid/Fast designations and new close combat results on tied scores, some real granularity in troop type differences is created.

Some additional foot types pursue automatically when winning a close combat, or have the option to pursue in some cases.

DBA players now get to play until half their army is destroyed instead of a third. I like this, too.

While on the subject of scale. . . 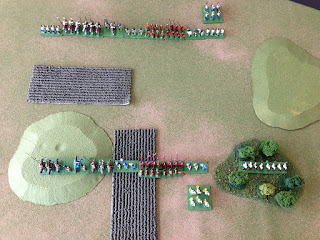 Last week I played my first game of DBA 3.0 at Village Games in Champlin. Three games, actually. This latest update of DBA is the best DBA ever. I'll provide more on the games played in an upcoming post. That same day, after playing 3 games of DBA, I watched a local Star Trek: Attack Wing tournament for a little while. The day of gaming got me to thinking about my last post on Star Trek "scale." Though Star Trek: Attack Wing uses ridiculously scaled-down "ranges," it didn't keep me from enjoying "the game." The same way that playing with twelve elements of around fifty total 28mm models to represent an army of maybe 50,000 soldiers is enjoyable - see the photo above.

Once I enter the "game world" I accept the "world" we've constructed with our rules and our models and just. . . play the game. In between games I think about how I need more models to create a more realistic impression of the masses of soldiers that were present on ancient battlefields. . . like this photo of some 15mm models based for the Command and Colors:Ancients rules (I was working on rules for the Republican Roman Legions). . . 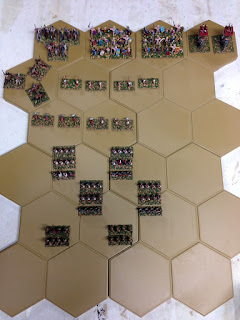 It looks really cool but I have just as much fun with 12 elements of 50 soldiers. . .  at least during the game. So how do I explain - or rationalize - the scale and size of my French and Indian War project? Obsession, I suppose. . .

Posted by Cluck Amok at 1:42 AM No comments: